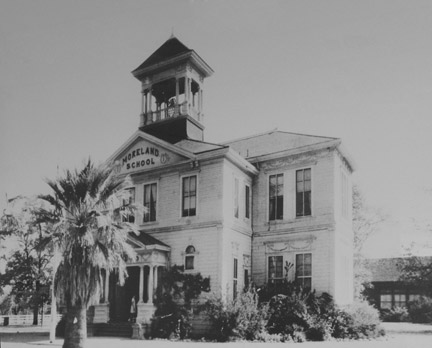 In 1851, Moreland was established as one of the first school districts in California (District #2). Instruction was provided in a private home. On November 13, 1852, teacher Samuel Rogers purchased the home of Zechariah Moreland for $350 to establish the district. The home was located at the corner of Payne and Saratoga Avenues, northeast of the old oak tree (officially named “The Moreland Oak Tree” in August, 1981). It remained the schoolhouse until 1894 when Moreland Elementary School was built at that location. The picture on our home page is part of a picture taken in 1933. The facility was planned to take care of the ultimate growth of the Moreland School District. At first, only the lower floor was used. The upper floor was occasionally used for dances until it was needed for classroom space. The school remained a district learning facility until 1949 when population growth and age forced its closure. In 1951, the building was removed from the site. The Moreland Apartment Complex, a senior housing center, now occupies the site and a plaque designates it as Historical Landmark #489. The original school bell from the front of the building was saved and stands outside of the present Moreland School District Office as a reminder of our proud history.
Elvira Castro

A teacher for 36 years in the district, from 1921 to 1957, Elvira taught at the original Moreland schoolhouse from 1921 to 1948, and continued to teach at the modern Moreland School from 1948 to 1957. Elvira Castro’s family history dates back to the early days of California’s Spanish heritage. Her great, great grandfather, Macario Castro arrived in California from Spain in 1794 and settled on a Spanish land grant in the area later named Castroville in honor of his family. Macario Castro’s son married the daughter of Alto California Governor, Pio Pico. Elvira Castro was their great granddaughter. After graduating from San Jose Normal School (known as San Jose State University), Elvira began her distinguished teaching career at the old Moreland School in 1921. Castro Middle School was named in Elvira’s honor upon the opening of the school in 1958.
Gussie Baker

Gussie Baker began as a teacher at the old Moreland School in 1937. She became principal of the school in 1941, and subsequently served as Superintendent from 1951 until her retirement in 1960. During her tenure in the district Gussie Baker saw student enrollment burgeon at whopping 4000%. She led the district through its first phase of modernization which began with the abandoning of the first Moreland School and included overseeing construction of the modern Moreland School. When Gussie Baker began teaching in the district in 1937, she was one of only three teachers employed by the district to teach 55 students on a single campus. Upon her retirement in 1960, enrollment in the district had grown to 4,379 students on nine campuses, each of which Ms. Baker was instrumental in planning and opening. Under Gussie Baker’s guidance, the Moreland School District entered the modern era. Her outstanding career included the creation of innovative curricular programs that distinguished Moreland for academic excellence. She brought instrumental music to the district and made Moreland one of the first districts in the county to develop its own library program. Gussie Baker worked tirelessly for student success and strong academic programs.
Leroy Anderson

Leroy Anderson was an important Saratoga orchardist who helped build the reputation of the Santa Clara Valley as a premiere fruit growing region in the United States. Anderson’s work and influence as an educator was equally important. He was appointed as the first president of the California State Polytechnic College in San Luis Obispo upon the school’s opening in 1902. As a professor of agriculture, as well as the director of curriculum for the college until 1908, Anderson was well ahead of his time, emphasizing learning by doing and earning while learning. He helped to establish Cal Poly’s hands-on approach to learning that continues to this day. In his later life, Anderson was the Santa Clara Valley’s leading proponent of water conservation. He was responsible for the creation of the Santa Clara Valley Water Conservation District, for which he served as board president. His efforts to promote water conservation resulted in the planning of Anderson Reservoir which was completed after his death and named in his honor.
George C. Payne

George C. Payne completed his elementary education in the district when classes were still held in the former home of Zecheriah Moreland. Considered one of the district’s most esteemed early graduates, George Payne devoted his life to growing fruit and nuts in his beloved orchards. He worked with pioneering botanist, Luther Burbank, and spent a year studying the walnut industry in Chile. Upon his return, he had considerable influence on prune, apricot and walnut growing in the Santa Clara Valley, helping the area gain world prominence in fruit production. For twenty-five years, he served as president of the Santa Clara County Walnut Growers Association, and was named vice president of the state association. He was born and spent most of his life on his father’s one hundred acre ranch. The present day Payne School was built on a portion of the Payne family ranch.
Samuel Curtis Rogers

Samuel Curtis Rogers was the person responsible for the creation of the Moreland School District, and can be considered its founder. Though he only served for two years in the district, he was instrumental in rallying the rural community toward the cause of educating its young people. Rogers was the third teacher in the district, but the first to teach for a sustained period of time. In order to find a permanent home for a community school, Rogers circulated petitions in search of a suitable location for the school. After Zecheriah Moreland offered his home for sale for use as a school, Rogers initiated a subscription drive to pay for the property. The community responded favorably. After only three weeks, Rogers collected $335 in donations, which paid for the Moreland property in full. In September of 1852, Rogers began the school year with a class that included 23 students ranging in age from 6 to 18. Not only was Samuel Rogers the first teacher, he also served as the first principal, business manager, and custodian. Early in 1853, Rogers formally petitioned the Santa Clara County Township asking them to “organize and number the district according to the laws of the state.” Rogers left the area in 1854 and finally settled in Prescott, Arizona. In 1897, while going through some of his possessions, Samuel Rogers came across the original record book of the Moreland School District and sent it to the district. This book, handwritten by Samuel Curtis Rogers, which lists daily attendance and financial records for the years 1852-1854, is housed in the district archives. In 1961, Samuel Curtis Rogers Middle School opened as the second middle school in the district to accommodate the increasing population in the area. Today, the Rogers campus houses the Easterbrook Discovery School.
Louise Easterbrook

Louise Easterbrook was a longtime Moreland School District Board Trustee. Louise and her husband, Harold, lived on a ranch on Doyle Road where they grew strawberries. A portion of the original Easterbrook strawberry farm is the current Easterbrook Discovery School campus. Harold Easterbrook became president of the Santa Clara County Strawberry Growers Association. After World War II, Louise and Harold Easterbrook were influential in helping Japanese-Americans, who had been confined in internment camps during the war, reestablish themselves in the strawberry industry. When the Easterbrook farm was sold, the neighboring school was names after Louise Easterbrook for her dedication to the Moreland School District.
Moreland Schoolhouse
The Moreland School District began in 1851 as the first rural school district in California. Students were initially taught in a private home by the district’s first teacher, Charles La Follette. In 1852, Zecheriah Moreland sold his home, at the intersection of what is now Saratoga and Payne Avenues, to be used as a schoolhouse. Moreland sold his home for $350, donating $50 from the sale to be used for the school district. The district was formally recognized by the County of Santa Clara in 1853, and given the name Moreland in 1862. In 1894, a new Moreland School was constructed on the same land Zecheriah Moreland donated. It was the district’s only school from 1894 to 1948. In 1948, a new Moreland School was built; the old building was torn down in 1950. The modern Moreland School housed students from 1948 to 1975. The original bell that hung in the tower above the school is displayed outside the current district office. A Moreland School was in continuous use on the original site of Zecheriah Moreland’s property from 1852 to 1975 – 123 years. In 1951, the property was designated California State Historical Marker #489, located on Payne Avenue, about 100 yards east of Saratoga Avenue. Twenty yards away stands the Moreland Oak, planted in the late 1800’s by Moreland founders.