Moreland Board Calls on Lawmakers to Fully Fund Public Education 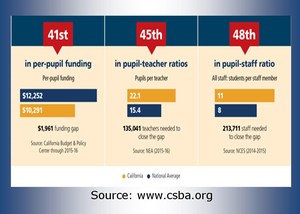 In partnership with employees of Moreland School District, including the Certificated, Classified and Management Bargaining Units, the Moreland Board of Trustees unanimously passed a resolution at Tuesday night’s Board Meeting, January 23, 2018, calling for full and fair funding of California’s Public Schools by state lawmakers.

January 26, 2018, San Jose, CA:  In partnership with employees of Moreland School District, including the Certificated, Classified and Management Bargaining Units, the Moreland Board of Trustees unanimously passed a resolution at Tuesday night’s Board Meeting, January 23, 2018, calling for full and fair funding of California’s Public Schools by state lawmakers.

This resolution supports the Budget Advocacy Meetings that Superintendent Mary Kay Going has been facilitating throughout Moreland over the past two months with the staff and parent community.  Teamed up with representatives from Moreland Teachers Association (MTA), Moreland’s Classified Unit (MCSEA), a Board Member representing the California School Boards Association (CSBA) and a District Administrator representing the Association of California School Administrators (ACSA), these presentations aim to educate the community about California’s below-average funding and empower people to contact their local elected officials, asking them to prioritize public education in California’s budget.  According to CSBA, “Despite boasting the sixth largest economy in the world and the highest gross domestic product of any state, California ranks at or near the bottom nationally in nearly every measure of school funding and staffing.”

“For decades, California has been funded far below the national average, hindering our ability to provide a competitive education for our students, “said Superintendent Mary Kay Going.

While Governor Brown’s budget proposal this month provides an increase in education funding, it does not address the fact that the state is still significantly underfunded.  If California funded schools at just the national average, school districts would receive an addition $1,961 per student, approximately $49,025 for a classroom of 25.  The Legislature will continue budget negotiations throughout the spring until the May budget revision, with a final state budget approval by July 1, 2018.

To view a copy of the Budget Advocacy presentation, the Board of Trustees recently adopted resolution, or action steps community members can take, visit http://bit.ly/StandUpForPublicEd To copy and paste the text in this sample letter, click here.