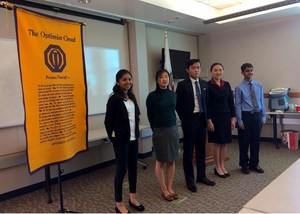 Responding to the topic, “What the World Gains from Optimism,” students initially submitted their speech to compete in the local Optimist club level before qualifying for the County competition.  Winners of the state competition have the chance to win a $2500 scholarship for first place, $1500 for second place, and $1000 for third place.