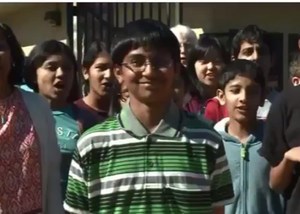 Shreyass competed against hundreds of individual school representatives who won their school Spelling Bee competition in January.  After competing in Moreland Middle's school competition, Shreyass qualified to move on to the semi-finals at the Lawrence Hall of Science in Berkeley on February 11.  After placing among the top scores in the initial written test, Shreyass advanced as one of  50 students to compete in the oral Spelling Bee.  Successfully spelling the word “thaumaturge,” Shreyass qualified for the Scripps Spelling Bee Finals that will be televised from KPIX Studios in San Francisco this Saturday.

Winners from the Scripps Spelling Bee finals will move on to compete in the Scripps National Spelling Bee taking place near Washington DC in late May 2017 with the opportunity to win more than $60,000 in cash prizes and the chance to appear on ESPN.  This year marks nine decades of the national spelling bee.