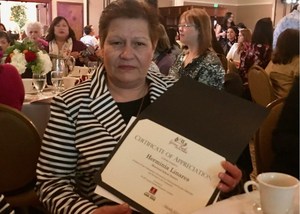 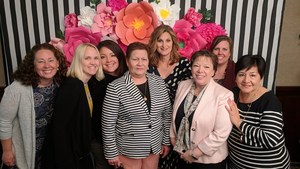 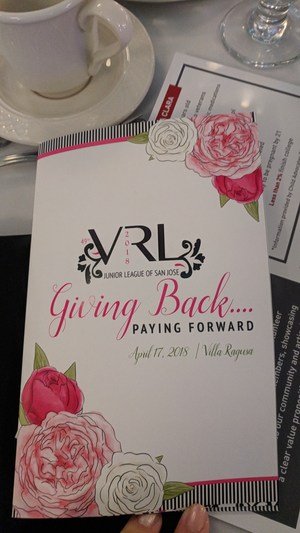 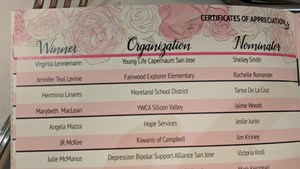 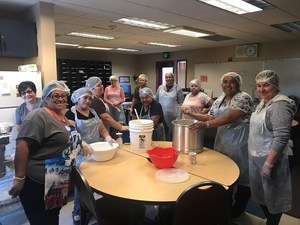 Herminia Linares, a former Anderson parent and current grandparent of a student, was honored this afternoon at the Junior League of San Jose Volunteer Recognition Luncheon in downtown Campbell. Herminia received a certificate for her work in organizing Anderson Elementary School’s tamale sales at the Moreland Education Foundation’s (MEF) annual Pumpkin Patch fundraiser.

In partnership with Anderson’s Community Liaison, Eva Chesnut, Herminia has organized this annual fundraiser for Anderson and the Moreland Education Foundation for over 10 years.  In addition to being the lead cook for this event, Herminia also ensure that all the food items are donated to avoid additional costs for those families who wish to assist with this fundraiser.  Grocery stores donate such items as meat and tamale wraps to parents, and on one Friday in October, volunteers of all ages gather together to be part of cooking and wrapping 500-1000 tamales, with all proceeds benefiting the students of the District.  Through the years, this fundraising event has transformed into a 20+ person volunteer force of parents who have brought together Moreland’s entire community and highlighted the culture and community within Anderson.

The MEF Pumpkin Patch, which receives thousands of visitors in just a few short weeks in October, experiences one of its busiest nights with the tamale fundraiser.  Whether marketed as a “Dia de los Muertos” (Day of the Dead) celebration or this past year’s “Terrifying Tunes and Tamales,” the hard work of Herminia and her team of parents have resulted in one of the most anticipated events of the Pumpkin Patch.  This school year, in particular, thousands of dollars were raised with this fundraiser and because all of the items were donated, the Moreland Education Foundation will receive 100% of the profit.

“Moreland is extremely lucky to have such passionate volunteers in our community,” said Superintendent Mary Kay Going.  “Herminia and her team of parents spend countless hours behind the scenes doing work that people don’t know about, and I am thrilled she is being recognized publicly for her contributions to the students of Moreland School District.  We truly appreciate all our parent and community volunteers!”

The Junior League of San Jose (JLSJ) is a charitable organization of women committed to developing the potential of women, improving the community, and promoting volunteerism through the effective action and leadership of trained volunteers.  The Junior League of San Jose promotes and recognizes volunteers through its annual community-wide Volunteer Recognition Luncheon to be held at the Santa Clara Convention Center in April.

The Moreland Education Foundation (MEF) is an all-volunteer group of parents who support all seven Moreland schools, with the goal to increase general financial support and additional resources for Moreland District schools when public funding may not be available.  Under the MEF organization, the Moreland School District is additionally supported by Music in Moreland (MiM) and Sports in Moreland(SiM). To learn more or to volunteer, visit www.mefhome.org.