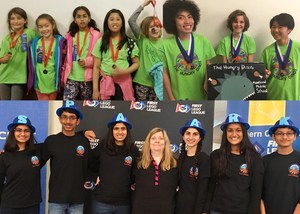 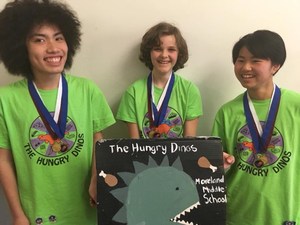 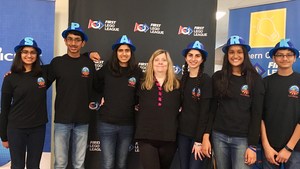 A Moreland Middle School student competed in the FIRST LEGO League Robotics tournament in November, and has since won awards at the NorCal Peninsula Championships in February and has participated in the Northern California Innovation Expo. In addition, three Moreland teams have successfully qualified to move on to the S.T.E.A.M.-based Destination Imagination state competition.

San Jose, March 9, 2018:  Moreland School District announced that a Moreland Middle School student competed in the FIRST LEGO League Robotics tournament in November, and has since won awards at the NorCal Peninsula Championships in February and has participated in the Northern California Innovation Expo.  In addition, three Moreland teams have successfully qualified to move on to the S.T.E.A.M. (Science, Technology, Engineering, Arts, Math) -based Destination Imagination state competition on April 7, 2018 in Clovis, California.

Aarushi Wadhwa, 8th grade student at Moreland Middle School, is part of a FIRST LEGO League (FLL) Robotics team, Team SPAARK, that has moved on to compete in the Northern California Innovation Expo, after competing at the FLL qualifying competition at NASA Ames in November and the FLL NorCal Peninsula Championship at Google Headquarters in February.  Aarushi and her team, from various local schools, worked to create AquaPods - plant based biodegradable sponges held inside pockets of cylindrical attachments designed to reduce water waste by half. Through experiments, the team has successfully proven that the soil with Aqua-Pods has higher moisture content, retains water for a much longer period, and has higher soil fertility index.  The team has already filed a patent for their solution. In addition to advancing in the competition, Aarushi and her team won the Robot Design Award, Robot Programming Award, the Global Innovation Award, and placed in the top 2% at the Northern California Innovation Expo this past weekend.

With almost 50 teams that competed in the Destination Imagination Regional Tournament at Fremont High School this past Saturday, March 3, 2018, teams representing Latimer and Moreland Middle Schools placed high enough to earn a spot in the state competition.

Two winning teams chose to compete in the Service Learning Challenge: Inside Impact - Latimer’s 3rd/4th grade team, Potato Chips and Moreland Middle School’s team, The Hungry Dinos. Their challenge was to identify, design and carry out a project that addresses a need in a real community, create a live presentation that highlights the project and its impact, create infographics that include information about the project, and create a storage device that transforms as the story of the project unfolds.

Moreland Middle School’s other winning team, Give Me a Break, chose to compete in the Improv Challenge: Treasure.  Their challenge was to research different cultures and famous explorers, create and present an improvisational skit about a quest to return a lost cultural treasure to its owner and integrate two explorers and a prop into the quest.

Destination Imagination® is a project-based educational program where student teams solve  open-ended challenges and present their solutions at tournaments. Focusing on 21st Century skills, Science, Technology, Engineering, Art, and Mathematics (STEAM), and leadership skills, each team works outside the school day in preparation for the regional tournament.   Winners of the state competition will compete at the global competition in May.

Moreland wishes to recognize all 9 District teams who competed in Saturday’s Regional Tournament: from Latimer: The Ruby Red Butterfly Friends, and Potato Chips; a combined Latimer Middle and Moreland Middle School team: S.L.A.P. (Super Lurking Atomic Pillows); from Moreland Middle School: Give Me a Break, and The Hungry Dinos, and from Payne: Cheetah Stick Robot Builders, Kittens Animal Kinder Team, Rainbow Nature Second Graders, and Unicorns of the Sea.  Moreland School District has been a participant in Destination Imagination for over twelve years.  Over the last five years, teams from Baker, Payne, Latimer, Country Lane, and Moreland Middle Schools have advanced to the State and then Global competitions representing the Moreland School District.