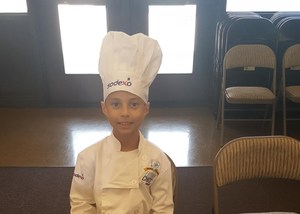 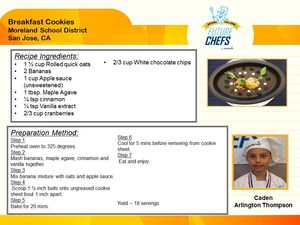 Third Grade Latimer Student, Caden Arlington Thompson, local district winner of Sodexo's Future Chefs Competition, has been recognized as a regional winner and advanced to the Semi-Final portion of the competition.

Placing in the top 40 out of 256 other school district winners, Caden created a winning recipe, Breakfast Cookies, as part of the Healthy Comfort Food Challenge.  Student culinary masterpieces were originally judged in the District-wide competition on March 22 based on originality, taste, and use of healthy ingredients.  The 40 Regional Finalists will be judged by an independent organization to determine the 5 Semi-Finalists who will then create videos for the final vote to determine the national Future Chef winner.

As the regional winner, Caden will be awarded an iPad Mini prize package, including an iPad case, screen protector, portable power bank, and headphones.

Future Chef is a national cooking competition put on by Sodexo Food Services that begins at the School District level.  Winners have the opportunity to advance to Regional, then National levels, competing with students from all over the country.  Previous Future Chef competitions have focused on “Healthy After-School Snacks” and “Healthy Breakfast Challenge” recipes.