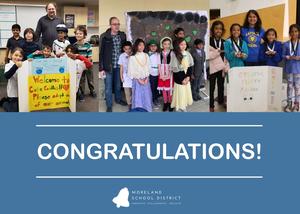 Three Moreland teams have successfully qualified for the Destination Imagination state competition on April 6, 2019 in Clovis, California. Of the 46 teams that competed in the Regional Tournament on March 2, 2019, teams representing Latimer and Payne Elementary Schools placed high enough to earn a spot in this S.T.E.A.M. (Science, Technology, Engineering, Arts, Math) competition.

Two teams chose to compete in the Project Outreach Service Learning challenge: Escape Artist: a Payne 3rd grade team, Give Me A Break; and the Payne 3rd/4th grade team, The Whirly Swirly Tiddlywings. Their challenge was to identify, design, and carry out a project that addresses a need in a real community, create and theatrically present a story that builds suspense about characters who attempt an escape, integrate information about the project through clues that help the characters attempt to escape, and integrate information about the future of the project.

Latimer’s 3rd/4th grade team, The Creative Fluffy Pandas chose the Engineering challenge: Monster Effects.  Their task was to design and build a structure that can support weight without breaking, test the structure by placing weights and then removing them, create and present a story in which the sudden appearance of a monster has surprising results, and design and create a special effect to enhance the sudden appearance of the monster.


In addition to qualifying to advance to the Destination Imagination® State Tournament,  Latimer’s Creative Fluffy Pandas, also received the coveted Renaissance Award, given to only one competing team at the Silicon Valley Regional Tournament.  The Renaissance Award recognizes teams who demonstrate extraordinary amounts of effort and preparation in their solutions or outstanding skill in engineering, design, or performance.


Destination Imagination® is a project-based educational program where student teams solve  open-ended challenges and present their solutions at tournaments. Focusing on 21st Century skills, Science, Technology, Engineering, Art, and Mathematics (STEAM), and leadership skills, each team works outside the school day in preparation for the regional tournament.   Winners of the state competition will compete at the global competition in May.


Moreland wishes to recognize all 7 District teams who competed in Saturday’s Regional Tournament: from Country Lane: Eagle Team; from Latimer: Ninja Unicat Friendship Team and The Creative Fluffy Pandas; and from Payne: Circles and Stars, Go Golden Stars, Give Me A Break, and The Whirly Swirly Tiddlywings.  Moreland School District has been a participant in Destination Imagination for over fifteen years.  Over the last ten years, teams from Baker, Payne, Latimer, Country Lane, and Moreland Middle Schools have advanced to the State and then Global competitions representing the Moreland School District.